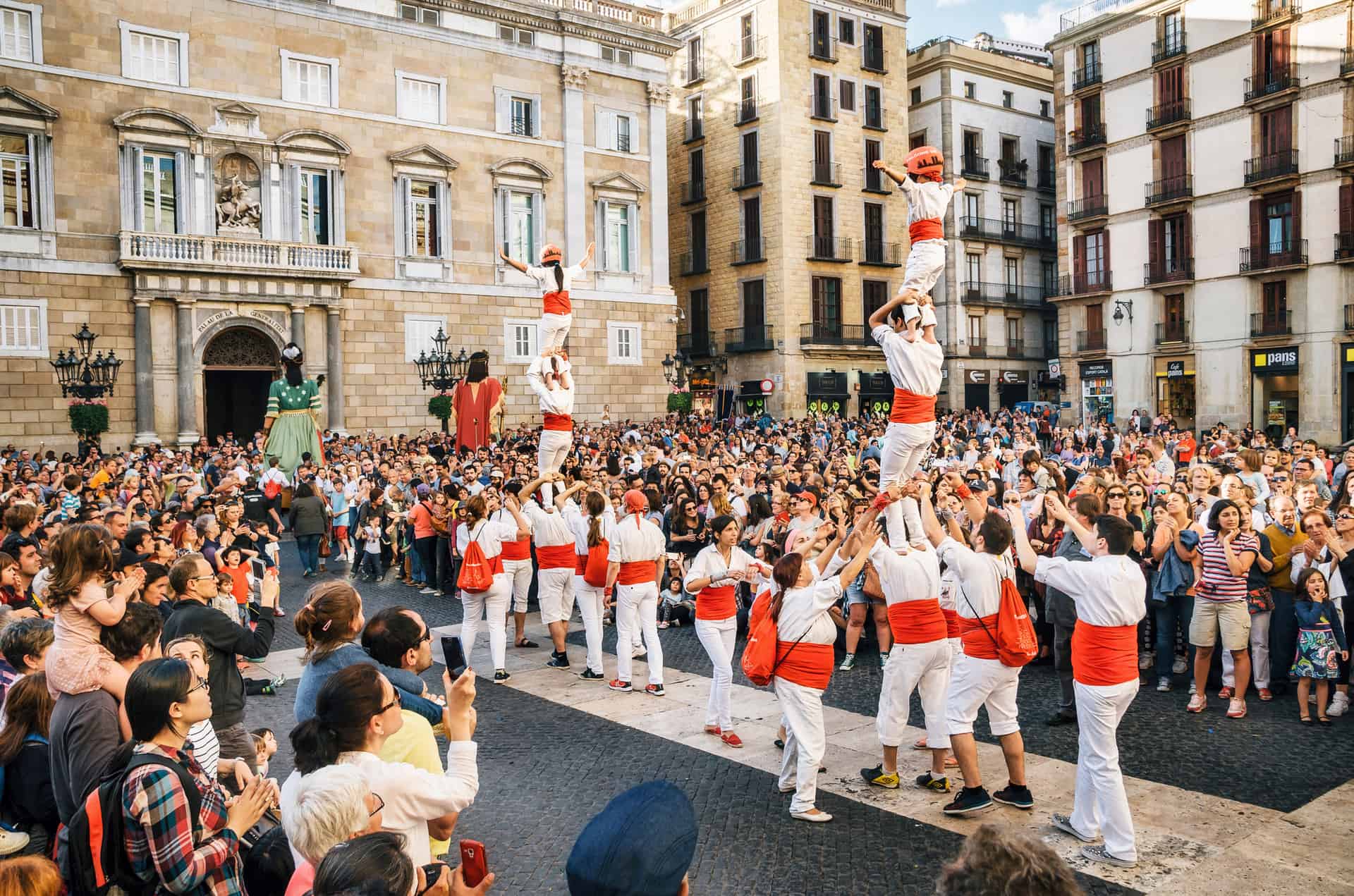 Beat the summer heat with Barcelona in June. Spend your summer days away at Barcelona’s festivals, events, parties, and attractions.

Read further as we describe in detail why a visit to Barcelona in June is going to be a blast.

As June marks the summer season in Barcelona, it is also the onset of a large tourist rush. But that shouldn’t dissuade you from visiting Barcelona in June, because summer and tourist season combined would mean more events and parties that you can join in.

The streets of Barcelona in June also come alive. The Barcelona street stalls and shops are bustling with goods, activities, and events during the day. During the night, you can spice up your life with the amazing pubs, clubs, and bars in Barcelona city.

Also, the attractions in Barcelona are breathtaking. From the cityscapes to the natural landscapes, Barcelona city has it all for you. So visit famous attractions like La Sagrada Familia, Park Guell, Barri Gottic, Casa Batllo, Casa Vicens, and many more.

If you are a certified food lover, then a summer stay in Barcelona would mean more food selection on the menu. Feast on authentic Spanish foods like paella, bomba, tapa, Spanish omelet, croquettes, and chorizo.

Of course, summertime is beach time. So ready your swim attire and catch the sun on the beaches and resorts of Barcelona.

Barcelona In June: Lively And Vibrant Festivals To Join In

Feast Of Sant Joan: Giving Strength To The Sun

The Catalonians believe that the sun reaches its peak during the feast of Sant Joan. At this point in time, people need to celebrate to give strength to the sun so that the sun will continue to bless the lands with fertility, wealth, and good harvests.

During the feast, there are three main symbols that you will encounter: fire, water, and herbs. The fire symbolizes the sun’s purity, water means the healing for the lands, and the herbs mean healing for the people.

Barcelona’s people celebrate these symbols by setting off fireworks on the “Night of Fire” or “Nit del Foc,” bathing on the beach during the solstice and putting medicine on your body during the feast.

So during the feast of Saint Joan, expect noisy streets because of the firecrackers and fireworks. If you are not into the celebration’s noisy aspect, you can join people lighting up large bonfires on the beaches.

There are three main event places for the Festival Jardins Pedralbes. These are The Palace, The Garden, and The Auditorium.

The Palace is a venue that was once a residence of the Spanish Royal Family. In The Palace, you will enjoy the combination of great food and great music. Besides food and music, you can also enjoy a tour around the house interior design, sculptures, and ornaments.

The Garden is a quiet sanctuary that you can stroll around before attending the concert. It is one of Barcelona’s most beautiful gardens and home to two of Antoni Gaudi’s artworks: the Hercules Fountain and the pergola.

The Auditorium is a large concert area that can host up to 2,000 people and most of the invited artists perform here. During this June music festival, you can watch famous artists like Sara Baras, James Blunt, Woodkid, Alan Parsons, Loquillo, and Crowded House. So make sure to attend this event during your June stay in the city of Barcelona.

One of the oldest traditions of Barcelona in June, Corpus Christi has deep roots in the city’s culture. Watching Corpus Christi will give you the chance to watch eggs dance and participate in Barcelona’s biggest festival of the year.

One of the festival’s unique traditions is the “ou com balla” or the dancing eggs. The “ou com balla” means making egg dance on top of water fountains. Some scholars say that tradition symbolizes the life cycle. Others say that it is a symbol of how time flows continuously without end. Whatever the meaning is, the dancing egg is fun to watch, so make sure not to miss it during your visit to Barcelona during June.

Aside from seeing the dancing eggs, make sure not to miss the procession of Corpus Christi since it is one of the biggest shows in the city of Barcelona. The procession includes the giant figurines like the Giants of la Ciutat, Santa Maria del Mar, the Barcelona Eagle, the Barcelona Lion, and the Great Ox. Aside from the figurines, there will also be participants dressed up as “trabucaires”, militia, Castellers, and dancers.

Make sure not to miss this festival during your June stay in Barcelona.

The city of Barcelona celebrates every June 29 Festa Major del Casc Antic. The reason for the festival is to pay homage to Sant Pere or Saint Peter.

Make sure not to miss out on this fun festival during your June stay in Barcelona.

Barcelona In June: Meaningful Events To Participate In

Primavera Sound: One Of The Biggest Music Festivals In Spain

Together with its collaborators and sponsors, the Primavera Sound features artists from different genres like Billie Eilish, Cigarettes After Sex, Charli XCX, Kehlani, Tame Impala, and Gorrilaz. The Primavera Sound is held from the end of May to early June and is held at Parc del Forum.

For supporters of the LGBT community, you’re in for a treat during your June stay in Barcelona. The city of Barcelona holds this event yearly every June 28 and 29.

The Barcelona Gay Pride is a grand show of support for the community that aims for fair treatment to LGBTs. Feel free to join the highlight of the event, the Pride Parade, in which everyone is invited to join. Aside from the parade, there will also be night concerts, foam parties, and club-hopping activities. Make sure not to miss out on this fun event.

Barcelona’s MotoGP: For The Motor Riders And Lovers

Aside from the yearly F1 Grand Prix, Barcelona also hosts an annual MotoGP event. You’ll watch famous riders like Fabio Quartararo, Joan Mir, Alex Rins, Franco Morbidelli, and Jack Miller. So for the fans of the high-speed motor race, this event is a must-watch for you during your stay in Barcelona in June.

Barcelona In May: Famous Attractions To Visit

The masterpiece cathedral by the genius architect Antoni Gaudi, La Sagrada Familia is Barcelona’s most eye-catching attraction. Visiting this amazing construct is a must for your June visit to Barcelona.

The three facades of the La Sagrada Familia features the three important moments of Christ’s life: birth, passion, and bliss. The facades intend to give inspiration to the viewers and be thankful for the creator like Gaudi.

The interior design of the La Sagrada Familia is stunning. The design of the ceiling, columns, and beams was meshed together to mimic nature’s beauty. And when the sunlight strikes the mosaic tiles of the cathedral, you’ll be instantly captivated by the light show it produces.

One of Barcelona’s most famous landmarks, Park Güell, is a vibrant mosaic park combined with lush greeneries. Due to its cultural value, UNESCO named it a World Heritage Site in 1984.

You can find the mosaic park in the northern part of Carmel hill. A mosaic dragon fountain on the stairway (named El Drac Salamander) will immediately catch your attention upon entering the park. Explore the park to discover the Mosaic Terrace, Nature Square, Colonnaded Pathway, The Hypostyle Room, Asturia Gardens, and the Gaudi House.

Your June tour in Barcelona city should definitely include Poble Espanyol. Poble Espanyol is an architectural museum that was once a precinct and internment camp for prisoners.

The walking tour in this attraction has an audio guide that will narrate to you the historical details and the secrets of Poble Espanyol. There are other activities that you can do as well like puzzle-solving games or crafting workshops.

Casa Batllo: The House of Bones

Casa Batllo was a house renovation work of Gaudi during the implementation of the Cerda plan. The Casa is also called “the house of bones” due to its bone-like facade.

Parc de la Ciutadella is the place to go if you want to cool down from the summer heat. Aside from the lush greeneries, the park also has attractions and museums that you can visit like the Cascada Fountain, Geological Museum, Castell dels Tres Dragons, Zoological Museum, and Umbracle. They also hold concerts in the park, so be sure to check if there are any during your June trip.

Barri Gothic, or most commonly known as the Gothic Quarter, is the old city center of Barcelona. You will feel as if you’ve traveled back in time as you walk along the old Roman district filled with old Roman structures and buildings. You can find some of the famous landmarks like Carrer del Bisbe and Sant Felip Neri’s Square here.

Barceloneta Beach: Beach By The City

The June weather is perfect for a day at the beach. Barcelona may be a highly urbanized city, but the beach stays clean and well maintained. It undergoes a strict water sampling and a daily cleanup. For your safety, there are also lifeguards assigned to the beach. Another reminder, bring your swimsuits and sunscreens when you visit Barcelona in June.

The Barcelona weather in June is hot. The June temperature during the day averages around 26 to 27 degrees Celsius.

How long should I stay in Barcelona?

To fully enjoy yourself in the city of Barcelona, we suggest staying a minimum of two (2) weeks. If two weeks is not possible, don’t rush sightseeing in Barcelona. You can always come back; Barcelona city is always open for you.

Any tips for the Barcelona trip in June?

In June, Barcelona has so many tourists. We highly recommend staying alert to protect your valuables. Also, due to a large number of tourists, we highly recommend buying your tickets in advance not to be stuck in the waiting line.

Due to the hot weather in June, we recommend keeping yourself hydrated. So, always bring water and other refreshments with you.

Barcelona highly values cleanliness, and that is why we encourage you not to litter on the ground while staying in Barcelona. Another reminder is not to spit on Barcelona’s streets. It is illegal, and you will receive a fine once caught.

Barcelona is a lovely city, so make sure to bring a good camera to capture every scene and moment.

Spending your June summer vacation in Barcelona is very much worth it.

Book with us now for your Barcelona in June trip!