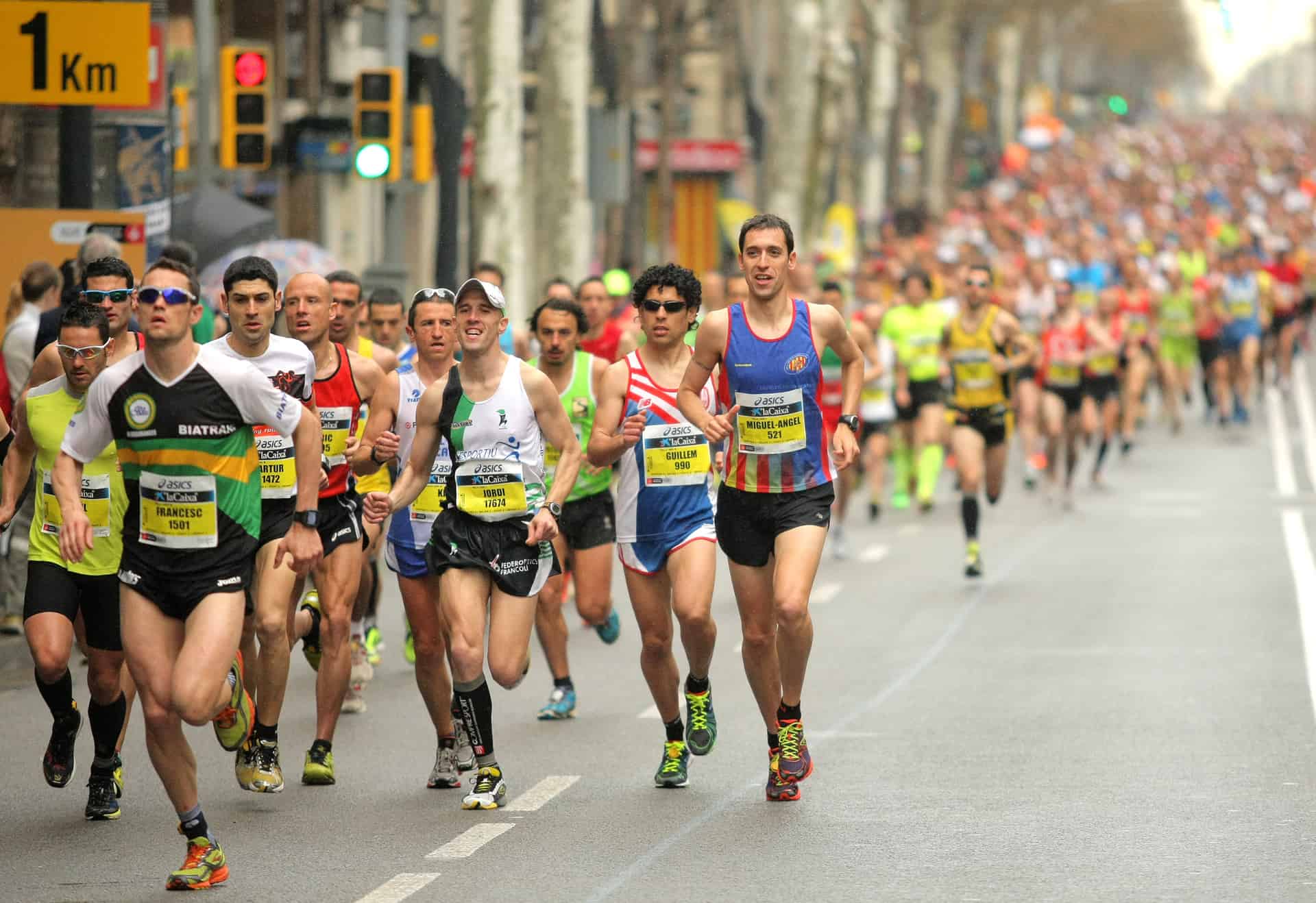 The month of March heralds the coming of spring. And like the blooming flowers on the field, welcoming springtime should be very refreshing.

March & Barcelona: A Time For Relaxation and Renewal

Visiting Barcelona in March will surely be a relaxing trip for you since March is not yet the peak season. Since March is not peak season or tourist season, you’ll enjoy lower rates for some of the best hotels, deals on the top Airbnbs, food, souvenirs, and other goodies. You’ll see fewer tourists, and that would mean that you’ll be able to enjoy the city of Barcelona fully.

The Barcelona festivals and events for March will renew and energize your spirit. The list includes Saint Patrick’s Festival, The Barcelona Marathon, Festival of St. Josep Oriol, and many more. So get ready to be imbibed with energy during your visit to Barcelona in March.

You’ll also be able to reflect while walking along the streets of Barcelona. Barcelona’s scenic landscapes will help you meditate and look back on the experiences that have happened in your life. Bring your camera as well because you’ll be able to take great photographs in Barcelona city.

For the beachgoers, the March weather is where the temperatures are ok for swimming. So make sure to bring your swimsuits and other beach accessories.

Barcelona In March: Energizing Festivals To Join In

The Festival for Sant Medir is held every year on the 3rd of March. The annual festival is also known as the “sweet festival” due to the large number of candies given away during the festival. The festival is done to honor Saint Medir.

From the stories, Medir is a farmer that lived in Sant Cugat during the 4th century. While working in his fields, Medir came across the persecuted bishop named Sever. The bishop told Medir that if any Roman came by looking for Bishop Sever, he should say to them the truth.

But the tradition probably came from the story of an ill baker who got cured after praying and promising that he would make an annual pilgrimage to the chapel of Sant Medir. The baker was then miraculously healed from his sickness and, as promised, made his annual pilgrimage. During his pilgrimage, the baker would play music and give sweets to people he meets along the streets.

During the celebration, there will be music, colorful parades, and giving away candies to the people on the streets. You’ll be able to see dazzling floats from different clubs and a long procession of horses and carriages adorned with vibrant accessories.

The Barcelona Beer Festival is one of the most awaited festivals taking place in Barcelona. It is held annually in March and was started in 2011 by beer lovers Rubén Río and Joan Fiol. Then the duo was later joined by other members. Although the March 2020 beer festival was canceled, there is already a beer festival plan for 2021.

Of course, your beer-drinking sessions will not be complete with music. That is why the Barcelona Beer Festival has bands and artists lined up to perform live. For those who want to know more about beer making, there are workshops, seminars, and talks about the process involved.

The Barcelona Beer Festival is a paid festival, so make sure that you’ve bought your ticket before attending.

Saint Patricks Festivals: A Mix of Ireland and Christianity

St. Patrick’s Festival is celebrated every March 17th. Aside from celebrating St. Patrick, the festival also memorializes the beginning of Christianity in Ireland.

According to the stories, St Patrick, who was sixteen at that time, was kidnapped by Irish men. During his captivity, Patrick worked as a shepherd in Ireland for 6 six years. While working, the story told that Patrick received a divine message from God. The divine message told him that a boat was waiting for him on the coast that would take him back to his family.

Upon his return, he dedicated himself to God and became a priest. After a while, St. Patrick returned to Ireland to spread Christianity. After his death, St. Patrick was anointed as a saint. The date of his death, March 17, became St. Patrick’s Day.

On the day of the celebration, there will be musical shows, drinking events, and rugby showdowns taking place – people dressed in green gather in Irish pubs to drink and celebrate. There will also be Irish performers that will dance and play the bagpipe. So, make sure to wear green to blend with the crowd and to get lucky as well.

The festival of St. Josep Oriol is celebrated from March 23 to 25. It commemorates Sant Oriol’s devotion and acts of devotion.

St. Oriol was a devoted priest that wanted to live a life of martyrdom. So he committed himself to help the poor and healing the sick. In the stories, St. Oriol did a number of miracles to heal every sickness, including people who are blind, deaf, mute, and paralytic. His ascetic way of life earned him the title “Mr. Bread and Water.”

The three-day festivities will be re-enactments of the miraculous stories of the saint. Expect parades made up of Catalan giants, dragons, and human castles (Castellers). Make sure not to miss the biggest parade that will be on March 25, the last day of the festival. It will start at 12 noon at Santa Maria del Pi Church.

Barcelona In March: Exciting Events To Participate In

The first Rally Barcelona Sitges took place in 1959. The purpose of the showcase was to promote tourism in Barcelona during the non-peak seasons.

During the rally, you’ll see different types of vintage cars by famous carmakers like Rolls-Royce, Buick, Renault, Le Zebre, and Ford. The showcased vintage cars and vehicles are those that were produced before 1928. And these vintage cars will roll along eight different scenic routes in Barcelona.

This event is a fancy treat for lovers of cars and engines. You can also try your luck by volunteering for the event. They accept volunteers that would want to work to make the event successful.

The Barcelona Marathon: A Run Around The City

Previously known as the Catalunya Marathon, The Barcelona Marathon is organized by four reputable organizations in Barcelona. The marathon is also one of the recognized races by World Athletics (The international governing body for athletics). The racers will follow a route that spans up to 42 kilometers that go around the city of Barcelona.

The marathon accepts participants from all nations. To take part in the race, you need to be 18 years old and register to reserve a spot. If you’re planning to take your kids along on your trip, the event also has a race for children. There are also other mini-events during the marathon, such as the pasta race and exhibitions.

Barcelona In March: Attractions For Self-Reflection

La Sagrada Familia is a masterpiece church by architect Antoni Gaudi and the most famous attraction of Barcelona. The cathedral is impressive both on the outside and the inside. The cathedral’s grandeur will surely amaze any tourist.

The exterior is made up of 3 facades with towering bell towers that symbolize the life of Christ. Once you step inside the cathedral, the cathedral’s interior design will overwhelm you. The design mimics nature as praise to the Creator. And when the sunlight strikes the colored mosaics, the cathedral will entertain you with a breathtaking light show.

Designed by Gaudi, Park Güell is one of the famous attractions of Barcelona. Due to its cultural significance, UNESCO named it a World Heritage Site in 1984.

You can find the mosaic park in the northern part of Carmel hill. Once you enter the park, El Drac Salamander (the mosaic dragon fountain) will welcome you with its striking colors.

Casa Vicens was Gaudi’s first big project. This project was initially built as a residential house for Manuel Vicens. Due to its architectural and cultural value, UNESCO declared it a World Heritage Site in 2005.

Like all the works of Gaudi, Casa Vicens take great inspiration from nature. The interiors are intricately designed with flowers, leaves, and plants. As you move from room to room, you’ll feel a natural design flow.

Casa Batlló: The House of Bones

Located at Passeig de Gracia, Casa Batlló is one of Antoni Gaudi’s works. Take a gander at its facade to know why it’s called the “house of bones.” Take a peek at why its interior design was praised for being an innovation during its time.

Barri Gothic, or the Gothic Quarter, is the old city center of Barcelona. While sightseeing along the old quarters, you will discover old Roman structures and buildings. Some of the most famous landmarks are Carrer del Bisbe and Sant Felip Neri’s Square.

From its name, Parc de la Ciutadella was once a citadel that controlled Catalonia. After the citadel’s destruction, a large space became available and was turned into a public park.

Today, Parc de la Ciutadella is a favorite place to visit by locals and tourists alike. The park has many attractions like the Cascada Fountain, Geological Museum, Castell dels Tres Dragons, and Zoological Museum. The park also holds concerts and shows in the park.

Barceloneta Beach: The Beach By The City

Barceloneta Beach is the most famous beach in Barcelona for plenty of reasons. The beach is easy to access from the city. It will only take you fifteen to twenty minutes to walk from the city center to the beach.

The beach is very clean. It undergoes a regular checkup through water sampling and daily cleanup of the beach. There are also lifeguards present to keep you safe. For foodies, the neighborhood around Barceloneta beach sells tapas and other local cuisines that you can check out.

The weather in Barcelona in March is delightful. The average temperature is about 16 to 17 degrees Celsius. There is a chance of rain so make sure you have raincoats and umbrellas with you.

How long should I stay to enjoy Barcelona in March fully?

Any tips when visiting Barcelona in March?

When you visit Barcelona, it is wise to buy tickets beforehand not to waste time falling in line to get one. Although Barcelona is a relatively safe city, we still recommend that you remain alert not to be taken advantage of.

With its off-season timing, good weather, and an incredible line-up of events, March is a great time to visit Barcelona.

So book with us now to get the best prices for your Barcelona trip.

Not visiting Barcelona in March?

Take a look at our guides for January, February, and April.