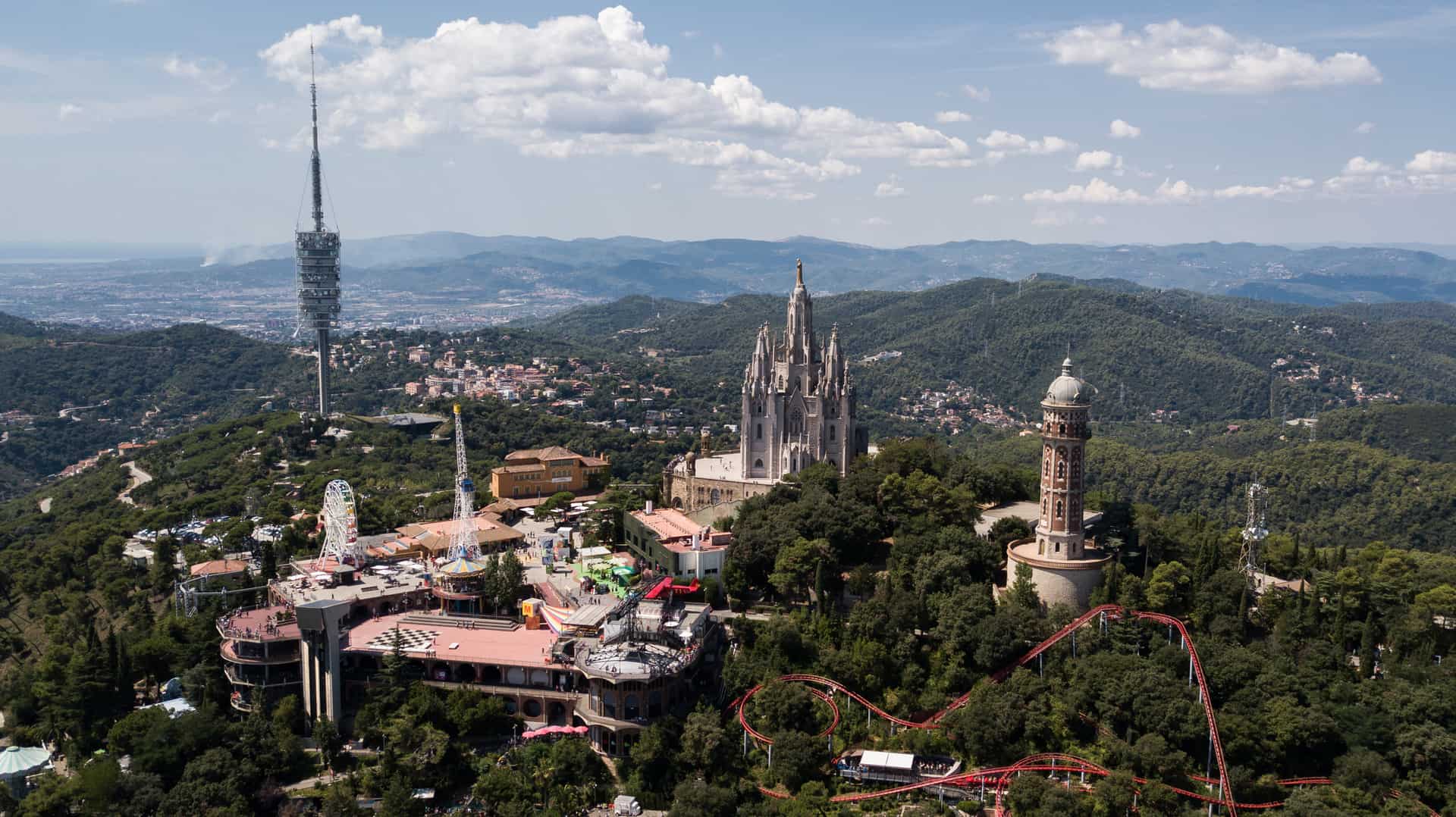 It is the tallest peak within the limits of Barcelona and thus Tibidabo is offering splendid 360 degree views over the sea, the city and its suburbs and inland towards Montserrat and the peaks of Montseny.

The top of Tibidabo is crowned by the cathedral del Sagrat Cor. This church has been constructed between 1902 and 1960 in a mixture of modernista and neogothic styles. Admission is free and you are rewarded with picturesque stained windows and beautiful stone work.

For 2 Euros an elevators takes you to the first viewing platform. If you are not afraid of heights, keep on climbing the stairs up to the bronze statue of Jesus Christ on the very top for an unforgettable view of Barcelona and beyond.

On the way up the mountain you have already passed the Tibidabo Amusement Park. Being built in 1889 it still managed to conserve the old-days charme.

Although there are some fairly thrilling rides as well, the main attraction is the setting of the park itself just above Barcelona and the Mediterranean Sea. This fame was still increased by being used as a filming spot in international movies like Vicky Christina Barcelona.

The third notable landmark on the top of Tibidabo is probably the most disputed. 288 meter Torre Collserola Television Tower was built for the transmission of the 1992 Barcelona Olympics.

Although designed by Sir Norman Foster its beauty is outchallenged by its counterpart on Montjuic, Torre Telefonica. For those who would like to see Tibidabo from a different angle, the tenth floor of the pod at about 140 meters is open to the public.

Tibidabo Cathedral of the Sacred Heart

In this spectacular location, it can be seen from all over the city. Especially when you are walking up Rambla Catalunya or Passeig de Gracia, you will always find Tibidabo Cathedral on the horizon.

Tibidabo cathedral has been designed by architect Enric Sagnier i Villavecchia. Construction started in 1902 and was finally completed by the architect’s son Josep Maria Sagnier i Vidal in 1961.

The architectural style of Tibidabo Cathedral can be described as a mixture of modernista and neogothic. To many people it shows similarity to the basilica de Sacre-Coeur in Paris or the Sacro Cuore di Gesu in Rome.

When you are approaching the cathedral from the Tibidabo funicular station, you are entering at the level of the crypt. Admission is free and you are rewarded with picturesque stained windows and beautiful stone work.

For 2 Euros an elevators takes you to the first viewing platform. The Jesus Christ bronze statue above your head resembles of Rio de Janeiro’s Christ statue of Corcovado.

If you are not afraid of heights, keep on climbing the stairs to the top of Tibidabo cathedral at 548 meters above sea for an unforgettable view of Barcelona and beyond.

Admission: the cathedral itself is free, the elevator to the top is 2.00 Euros.

Opening times: 07.00 to 22.00hrs for the cathedral, the elevator to the top and the funicular to the mountain close earlier, so make sure to be here before 19.00hrs.

The Tibidabo Amusement Park stands on Mount Tibidabo, the highest point on the Collserola Ridge and Barcelona’s natural green “lung”. Its prime position means you’ll enjoy exceptional views of the city throughout your visit.

Tibidabo is Spain’s oldest amusement park, the second oldest in Europe and one of the first ever built in the world.

Since it opened in 1901, its rides and attractions have been renewed and extended along with its amenities, including cafés, panoramic restaurants, play areas and lively entertainments which you’ll find among the attractions.

Come up to the Tibidabo Amusement Park and enjoy its iconic attractions as well as its most recent additions.

More than 25 rides and attractions for all ages: the Plane; the new roller coaster; the Plaça dels Somnis, or Plaza of Dreams; the gold mine; the Sky Walk; the Miramirall hall of mirrors; and, of course, the Giradabo, the large ferris wheel, 20 metres in diameter and 500m above the city, which is already part of the new Barcelona skyline.

How to get to Tibidabo?

By metro take the brown line L7 from Placa Catalunya to Avenida Tibidabo. Change to the historic Tramvia Blau to Plaça Dr Andreu from where the Tibidabo funicular leaves.

Alternatively use the Barcelona Bus Turistic, which stops next to the splendid La Rotonda building at Avenida Tibidabo.

Insider tip: For your way up to Tibidabo you can also use the Vallvidrera Funicular. From Placa Catalunya take S1 or S2 to Peu del Funicular, change to Vallvidrera Funicular and afterwards continue on Bus 111. This scenic ride is also the cheapest way up the mountain since you just need one normal metro ticket!

Christian Petzold is a successful touristic entrepreneur, experiential traveller and round-the-world backpacker. He holds an academic degree in tourism management.

His touristic expertise has been covered in radio, newspaper and television.