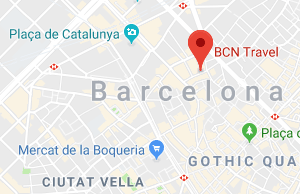 The tour leaves Barcelona at 8:30am and heads straight up to Girona, a well-established city that has survived many sieges in the course of its long history, since its founding in around 76 BC by the Romans.

It has been dominated by many different people, and, as a result, has a great richness of architectural heritage. The Cathedral, founded in 1038 on the site of a former Mosque, and the spectacular Roman walls, along which you can walk, are just two examples of this.

There is a wide variety of museums and sites of historical interest in Girona, such as the Jewish Quarter and the Arab Bath house. If you prefer, the narrow streets of the old town are very pleasant just to wander around, indulge in a spot of window-shopping, or find a secluded cafe and sit back to watch people pass by.

From Girona, the tour heads to the impossibly charming Pals, a small mediaeval village that grew out of what was once a fortress. The name of the city comes from palus, the Latin word for marshlands, as this is what the fortress used to be surrounded by.

From Pals, we head to the fishing village of Calella de Palafrugell. This delightful escape has whitewashed houses that reach right down to the sea-front and a number of traditional restaurants – perfect for a leisurely lunch. You can also explore the rocky coastline, take a dip in the inviting waters, or follow the coastline round to the beautiful cliff-top botanic gardens at Cap Roig.

From Calella de Palafrugell we will return to Barcelona, arriving at 7:30pm.

Book on GetYourGuide
Book on Viator